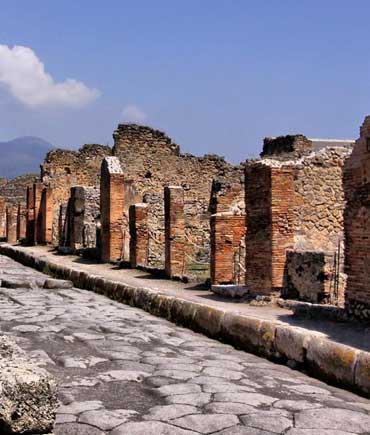 It was once a Roman port town, which was buried by one of the most catastrophic volcanic eruptions of all time. Walking through its streets and visiting its houses takes you back in time, in the Roman age. You can visit its private houses, shops, bakeries, restaurants, public baths, theatres and the amphitheatre. A walking tour can last from two hours to a full day. The visit can be combined with the Vesuvius, Herculaneum or Naples (museum or panoramic tour). Today, Pompeii attracts visitors, in an irresistible way, to the rediscovery of what remains of the ancient splendour of the Roman Empire in the 80 B.C. Pompeii was semi-destroyed and covered by the eruption of the volcano Vesuvius in 79 A.D. and forgotten over the years. 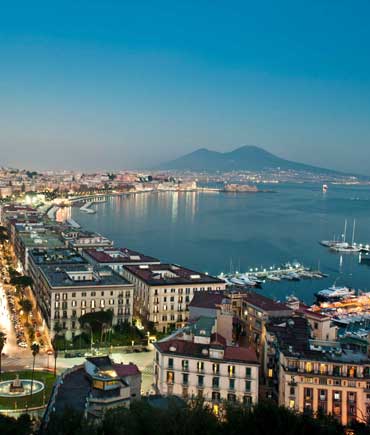 Sadness and liveliness, colour and noise are all components of the Neapolitan character that make this city something unique and special. It is one of the oldest cities in Europe; founded in the seventh century B.C. by the Greeks, then conquered by the Romans and the eleventh century by the Normans, then the Swabians, then the Angevin (French), then the Aragonese, then the Spaniards and after the Bourbons, then came the Napoleonic rule, until the unification of Italy. Foreign dominations have left their mark on art, in cooking, in language, in character. Currently Naples is living a moment of great re-evaluation, regaining its reputation as a city of art, thanks to its fascinating historical centre, to its museums and its churches. An example of a full day: In the morning a visit to the historical centre: "Duomo", "S.Lorenzo Maggiore", "via San Gregorio Armeno", famous for the "presepe", the chapel of "San Severo", "S.Domenico Maggiore", "Santa Chiara" with the tiled Cloister, and the Church of "Gesù Nuovo". Walk from "Piazza Municipio" to "Piazza Plebiscito", with an external visit of the "Maschio Angioino", the Theatre "San Carlo", the "Palazzo Reale" and the "Galleria Umberto I". After lunch, from the "Beverello" pier, panoramic tour of the city by bus, seeing the "Riviera di Chiaia", the seafront of "Mergellina", the district of "S.Lucia", the seaside village and the "Castel dell'Ovo", then up to the hills of "Posillipo" from where you can admire the entire Gulf of Naples. 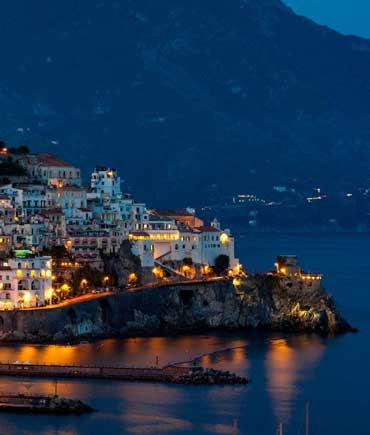 We speak of the "Amalfi Drive" as one of the most spectacular routes in Europe and it must be true, if you think of the incomparable, beautiful scenery along the way to Amalfi, one of the oldest maritime republics, as well as the homeland of "Flavio Gioia", inventor of the compass. In the centre of Amalfi, preceded by a wide staircase, stands the Cathedral, dedicated to St. Andrew (IX century) with a scenic facade, decorated in the tympanum by a nineteenth-century mosaic. Free time for lunch. We recommend a visit to the Arsenal, where the great galley fleet was built. On the Amalfi Coast, one must not miss a visit to the "Grotta dello smeraldo" that leaves from the port of Amalfi. After, the tour continues to Ravello where the natural beauties of the landscapes harmonize with the charm of the precious monuments. Visit the Cathedral dedicated to "San Pantaleone" and Villa "Rufolo", which inspired Wagner to compose his "Parsifal" and where, every year, a series of musical concerts are organized in his honour. Returning to Sorrento. 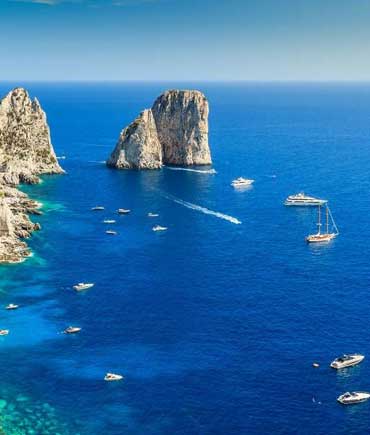 An island of calcareous-sedimentary origin; it is one of the most renowned international tourist destinations. It has an almost inaccessible coast with many caves, of which the most famous is the "grotta azzurra". The island has a rich vegetation and a fabulous blue sea, which enchant its visitors. Here, one visits the famous Villa "San Michele", former residence of the Swedish physician and writer Axel Munte, the gardens of Augustus, the "grotta azzurra" (sea conditions permitting), the remains of Villa "Jovis", residence of the emperor Tiberius. A boat ride around the island is also possible. A full day excursion is recommended. A day entirely dedicated to visit Capri is not to be forgotten, an island rich in natural beauty, spectacular views, historical importance and, why not, worldly activities that have involved the entire world. It starts from the port of Sorrento by hydrofoil, enjoying a fascinating traverse along the Sorrento coast. Upon arrival at Capri (Marina Grande), Anacapri is reached by minibus to visit the Villa "San Michele" of Dr. Axel Munthe, the famous Swedish writer whose "best seller" was the book "The Story of Saint Michael" that illustrates the time spent by the author in Capri and describes its wonderful beauties. After some free time for lunch in Anacapri you go to the centre of Capri to visit the Gardens of Augustus, from where you can admire the famous "Faraglioni" rocks as well as "Marina Piccola", the last residence of Grace Field. You then have some free time to go shopping and see the famous "piazzetta", the symbol of the elegant and prestigious Capri. Return to the port and return to Sorrento.